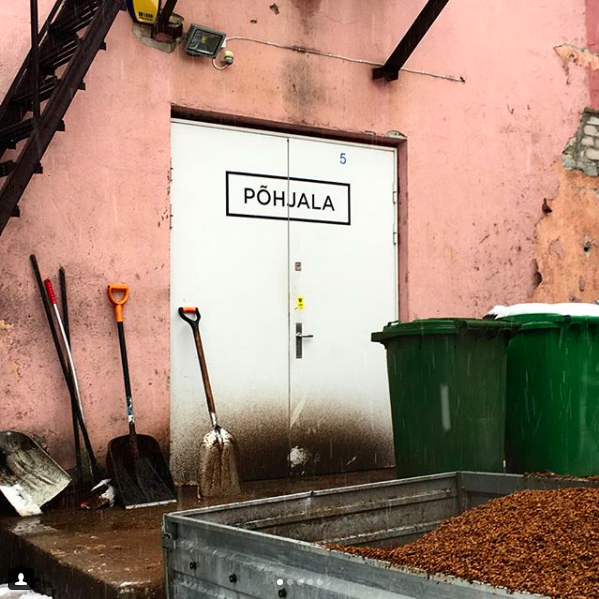 The last weekend in October, my boyfriend and I jetted off to snowy Tallinn, Estonia and had the good fortune to be hosted by the very kind folks at Põhjala Brewery.

On a tour around the brewery, we smelled a beer being mashed in, saw the (continually-expanding) brew kit (they’re up to 18 fermenters now!), and sampled a beer from the bright tank that was soon to be aged in Heaven Hill rye barrels, which were being prepped for filling before our eyes. (Each barrel is steamed to help the wood swell, preventing any leakage and precious beer loss. It’s also an important sanitation step for the barrels, too.)

One of my favorite sights was the barrel room – primarily because of the fun artwork on the walls  (swipe thru to the third picture) – but it’s easy to tell this project is a point of pride for the brewery.

The folks at Põhjala are big fans of barrel aging – this year alone, they’ve released beers aged in bourbon, cognac, Islay whisky, rum, gin, pinot noir, and tequila barrels… and that’s not even the full list!

It’s clear to see the team has loads of fun with what they do, too. Exhibit A: the Mel Gibson, a Scottish-style ale aged in Scotch Whisky barrels. Exhibit B: the Imperial Ginie, an extra-strong gose aged in, you guessed it, gin barrels.

Not every beer they produce spends time in a barrel though. They’re particularly proud of their Baltic Porter as it’s a style that originated locally in the Baltic States; inspired by the English Porter, of course.

How does Baltic Porter differ from English Porter?

According to style guidelines used for judging beer competitions, Baltic Porters are quite fruity (think dark fruits like plums, prunes, and raisins) and higher in alcohol than English Porters, while remaining less roasted and lower in alcohol than Imperial Stouts. Unlike their English inspiration, though, Baltic Porters are often brewed with lager yeast, as most other beers brewed in this region were lagers, so the same yeast was used out of convenience.

I was excited to ask Põhjala’s head brewer, Chris, about their take on the Baltic Porter. At Põhjala, all of their beers are brewed with ale yeast, a slight variation from the Baltic Porters of the past, but the beer goes through a long, cold-conditioning to smooth out the flavors, like a lager would.

Compared to an English-style Porter, Põhjala’s Baltic version has more booze and more dark fruit notes from the use of Special B malt. They aim to keep the roast character nicely balanced and rounded, too; unlike their Imperial Stouts which are much more aggressive in their roastiness.

Thirsty to try this style now? Look out for their Öö Baltic porter or the Talveöö, a version brewed with coconut, vanilla and cardamom (it’s so tasty!). (Fun fact, öö means “night” in Estonian, inspiring the name of the beer, as it’s “as dark as the night sky”.)

I can’t thank the team at Põhjala enough for taking the time to chat, answer (allllllll) my questions, and show us around – from Peeter, in sales, to Chris, their head brewer, to Samu, who runs the quality lab.

The brewery has some really exciting plans in the works for the next few years – I’m already set on coming back in 2019 to check out their new brewery.