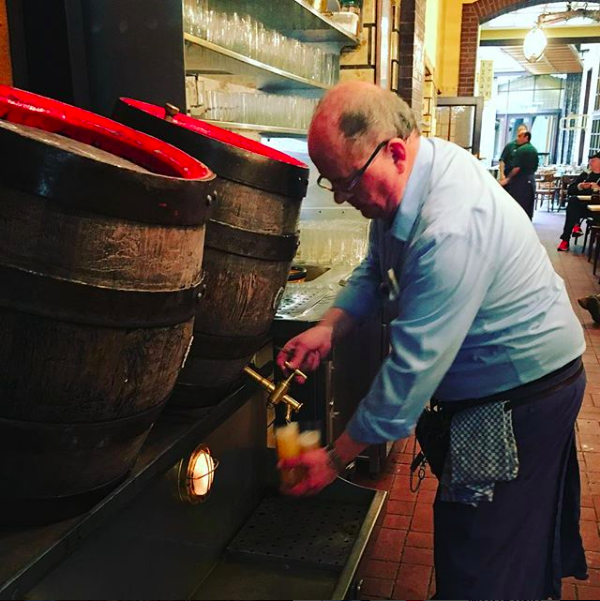 Inspired by my Cicerone studies, I spent A LOT of time in Germany this year, as there is so much beer history to discover. This picture (along with picture #7) is from my first trip of the year – to Cologne, in search of Kölsch.

The highlight of the city’s brewing scene had to be Päffgen. While it’s easy to stumble upon a brand-name brauhaus in Cologne’s old town, very few actually brew on-site these days. But walk just 15 minutes west of the Cologne Cathedral and you’ll find this absolute gem.

With an on-site brewery at the back of the building, Päffgen’s freshly brewed Kölsch doesn’t have to travel far, which is great news, as Kölsch is a rather delicate and subtle beer style.

Unlike most German styles, Kölsch is produced using top-fermenting ale yeast and is then lagered, or stored at cold temperatures, prior to serving. Ale yeast are often described as having a “less-clean” fermentation profile than lager yeast, as they produce byproducts, called esters, that lead to fruit aromas and flavors.

The delicate Kölsch style has a honey-like sweetness from the malt, complemented by subtle fruit esters and spicy, floral hop notes. Clear gold in appearance, this style has a smooth mouthfeel and dry, refreshing finish. As these nuanced flavors and aromas can fade over time, it’s recommended to serve this beer when “young”, or fresh. And Päffgen does just that.

While Germany is typically associated with bottom-fermenting lager brewing, Cologne has been brewing top-fermenting beers since the Middle Ages. The Kölsch style wasn’t developed until the late 1800s, however, to compete with traditional German pale lagers.

Kölsch is a protected appellation in Europe (similar to Champagne wine or Roquefort cheese), so only breweries within the region of Cologne can produce the true Kölsch style. Hence the need for a visit!

Not only is the beer unique to Cologne, the serve is pretty unique, too. Blue-shirted waiters, called köbes, fill tiny 20cl glasses (just over a third of a pint) directly from the barrel, then deliver them to your table. There’s no bar service. There’s no bar. (Altbier in Düsseldorf is served similarly.)

As soon as your glass is empty, the köbe is at your table with a full one. Each glass is marked off as a tally on your coaster, and they just keep coming until you place your coaster on top of your empty glass – the signal you’ve had enough.

Also, there’s only one beer available. ONE!

So much for breweries needing a core range. In Germany, just nail one style then serve it by the bucket load (err, barrel).

Another highlight was seeing the dispense method. In the US and UK (with the exception of cask beer), most beers are served on draught using some kind of dispense gas, a cooling system, and lengthy lines of tubing.

At Päffgen, their Kölsch is directly dispensed from the barrel using nothing but gravity. The barrel is hoisted up by a large metal claw onto a table top over a trough. The tap is hammered in, then the beer is ready to flow into a tray full of 20cl glasses. Once the barrel is empty, the tap is removed and banged into the barrel down the line, and so on. No expensive or technically demanding dispense kit needed here!

The best part about Päffgen? The beer tastes amazing.

Go experience it for yourself, it was a real highlight of my year in beer.

(And while you’re in the area, why not take a quick train ride to Düsseldorf to experience Altbier in its hometown? You can thank me later!)